This is a guide to the six wives of King Henry VIII of England and is created for those in the Medieval and Renaissance Studies (MERS) minor at Brandeis University. It follows the learning objectives of the minor.

This LibGuide is a start to your study of Henry VIII and his six wives. If you'd like to learn more, below are some more sources for you to peruse from documentaries to books to musicals.

David Starkey hosted a documentary about Henry VIII's wives for the the UK's Channel 4 in 2001. Though not available to stream, it can be bought on DVD from Amazon or through interlibrary loan from WorldCat, a global library catalog Brandeis has access to.

Historian Lucy Worsley's documentary Secrets of the Six Wives is available for streaming through PBS Passport.

There have been numerous movies, tv shows, plays, musicals, and historical fiction novels written about Henry VIII's wives. Here are a selection of just some of them for you to check out. 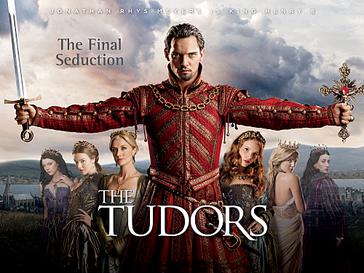 The Tudors is what propelled Henry VIII's six wives into the popular consciousness in the 21st century. The cable subscription network dramatizes the reign of King Henry VIII, using debauchery and sexuality to pepper the sometimes dry historical record. It's not the worst offender in terms of history accuracy, but you definitely want to take its claims with a grain of salt.

This musical from Lucy Moss and Toby Marlow is playing on the West End and will come to Broadway early in 2020. It imagines Henry VIII's wives as modern pop divas in a contest with one another. Whoever can convince the others that she had a worst marriage to Henry will become the girl group's lead singer. Each performer sings in musical styles influenced by artists from Ariana Grande and Beyonce to Adele and Nicki Minaj. The video clip above is from a performance at London's Olivier Awards.

If you want to know more about the man himself in his own words, you can read Henry VIII's letters from the British History Archive online, as they are in the public domain. The letters of Spanish ambassador to England Eustace Chapuys can also be found here.

March 2020: Six the Musical heads to Broadway, based on the Edinburgh Fringe then West End musical that has also run in Chicago and the Cambridge ART this year. The cast from the two American runs of the show will reprise their roles for Broadway.

June 2020: Susannah Lipscomb's forthcoming book on Henry VIII's wives will add yet another take on these extraordinary women, in addition to her work about Henry VIII and everyday life in various historical periods.