This guide focuses on the men and women, both Patriot and Loyalist, who risked everything to collect intelligence during the American Revolution.

In late 1776, an American secret agent overheard a British intelligence officer say, “that by means of their Emissaries they were informed of everything that passed among us and that Women were the most proper persons for that purpose." (Bakeless, 1959, p. 123). Since women’s intellect was routinely underestimated, they could move effortlessly throughout the landscape of the Revolution relatively undetected. Assumed to be domestic, innocent, and well-meaning, it was difficult for men of the period to see scheming maliciousness as the role of a woman. How could a woman who was hanging laundry on a line, or knitting a pair of socks, be a danger to anyone? By nature of their unassuming roles, women became the perfect vehicle for collecting intelligence on both sides of the American Revolution. Here, we see the efforts of ladies for Washington's Continental Army. 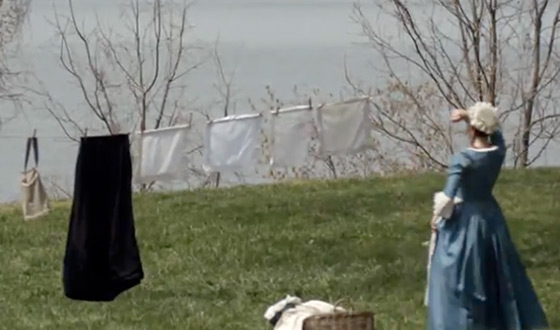 Anna “Nancy” Smith Strong was the wife of Selah Strong of Setauket, New York. At the outbreak of the war, Selah was quickly jailed aboard a British prison ship for insurrection. With her husband in jail, Anna was forced to face the British forces who occupied Setauket alone. Anna joined her childhood friend, Abraham Woodhull, in the Culper Spy Ring and passed messages through her laundry line. To differentiate a signal from a normal wash, Anna would hang a black petticoat along with a specific number of handkerchiefs after it (Berkin, 1997, p.190). This combination of "laundry" would tell Woodhull which cove his contact from across Long Island Sound was hiding in. For example, four handkerchiefs meant that the contact was hiding in the fourth cove along the shore.

The Culper Spy Ring had a complicated series of numbers and code names that made up their messages to Washington. There is some speculation that Anna Strong was assigned the number 355 in the Culper Spy Ring code book. However, 355 simply refers to "lady". Whether or not this referred to specifically Anna Strong, or just to women in general, historians will never know. Lydia Darragh was living in Philadelphia, Pennsylvania in the fall of 1777 when the city fell under British control. Members of the Quaker faith, Lydia and her husband were bound by their religious beliefs not to take up arms, but that did not stop them from contributing to the war effort. When their home was taken over by Major John Andre, the head of British intelligence, Lydia seized the opportunity to collect information for Washington.

On the evening of December 1, 1777 British officers ordered the Darragh family upstairs and told them not to come down. Sneaking out of her chambers, Lydia overheard Andre and his men planning a surprise attack against the Continental Army on the evening of December 4. Returning back to her bedroom, she feigned sleep when the officers told her that her house was once again hers. The next day, she set out with an empty flour sack towards Washington's camp, posing as a woman who was out collecting flour for her family. She encountered Elias Boudinot, the commissary of prisoners, and handed him a "dirty old needle book with, various small pockets in it." Within one pocket, Boudinot discovered "a piece of paper rolled up into the form of a pipe shank. On unrolling it, I found information that General Howe was coming out the next morning with 5,000 men, 13 piece of cannon, baggage wagons, and 11 boat on wheels. On comparing this with other information, I found it true and immediately rode post to headquarters." (Elias Boudinot's private journal, ushistory.org). Darragh's actions prepared Washington's forces for the battle at Whitemarsh, and the face off between the two armies resulted in an American victory. 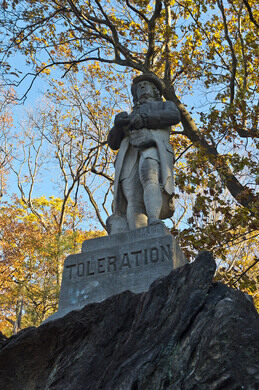 The statue of Toleration located on top of "Mom Rinker Rock" in Fairmont Park, Philadelphia, PA.

At the time of the American Revolution, Molly "Old Mom" Rinker lived outside of Philadelphia. It is said that "Old Mom" was known for bleaching her flax and knitting on a rock atop a cliff in the Wissahickon Valley in Germantown (Allen, 2007, p.101). Washington used her family's inn, Buck's Tavern, as an overnight headquarters and stationed his Green Mountain Boys nearby. This set up allowed Molly to spy in plain sight. Sitting on her rock pretending to knit socks, the British solders would pay no attention to this domestic matron. Every so often however, she would "accidentally" drop a ball of yarn over the cliff, and it would plunge into the brush below where the Green Mountain Boys were waiting. Whisking the ball of yarn away to Washington's headquarters, the boys would unroll the yarn to find a message in the center with details of British troop movements overheard by Rinker and her family.

It is said that Rinker's messages were instrumental in the Battle of Germantown on October 4, 1777. Although the battle was a British victory, General John Armstrong is reported to have said, "without this brave woman his troops would have been doomed". (Frank, 2013, p. 471-472)